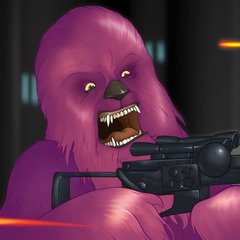 We are looking for Event Ideas to engage you all in the events and make sure you all enjoy them. So if anyone has any suggestions please feel free to post them here. Thank you

a PvP arena style event would be cool, im not sure what it would take to put that together, but maybe can have different heats 1v1, 2 vs2, 3 vs 3, and maybe also a non jedi vs non jedi bout. Or 30 people enter and a king of the hill, last one standing wins. Anything PvP for me sounds fun.
Top

A Monster Hunter rip off event, kinda along the lines of we get clues to where the beasts are and each creature has a particular weakness if that is achievable. i Know we do not have the numbers to have so many of each class or damage type but that is my idea needs for fine tuning clearly but you the general idea.
Top

Basically, Creature Handlers and Droid Engineers battle their pets to determine the best trainer on the server. For rewards, we could have special pets. Rancors the size of Porgs, special, tameable Krayt dragons, special droids, etc.

It wouldn't involve everyone, unfortunately, but niche tournaments can be lots of fun, with specialized rewards for excelling in your field.
Top

A bio-engineering disaster has created a race of rapidly recreating creatures. If they escape, they will overrun the planet, and could even spread to the other planets hiding in the cargo of escaping ships. These vicious creatures even regenerate when cut in half! All hands are requested to assist in the suppression of this disaster.

We could have certain creatures be permanently killable by certain damage types, and have goals beyond simply killing them, such as initializing the containment system to gas the entire facility.